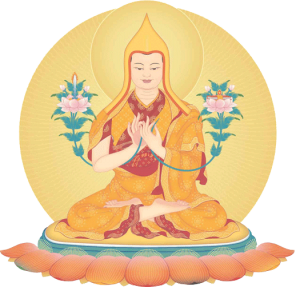 The following is extracted from a talk given by Venerable Geshe Kelsang Gyatso on Je Tsongkhapa Day 1996 at Manjushri KMC .

‘Before Je Tsongkhapa appeared in Tibet, many Tibetan scholars and practitioners already knew that he was coming because of predictions made by Buddha Shakyamuni that in the future Manjushri would appear as the Tibetan Lama, Je Tsongkhapa.

You may recall that Buddha in his Root Tantra of Manjushri said to his Heart Disciple Manjushri:

After I pass away
And my pure doctrine is absent,
You will appear as an ordinary being,
Performing the deeds of a Buddha
And establishing the Joyful Land, the great Protector,
In the Land of the Snows.

‘The Land of the Snows’ refers to Tibet, and ‘Joyful Land’ refers both to Ganden Monastery and to the Ganden doctrine, the great Protector.

Buddha was saying that in the future, after he had passed away and his pure doctrine was finished, at that time Manjushri would appear in the aspect of an ordinary being but would perform exactly the same actions as a Buddha, and in particular he would establish Ganden Monastery and the great Protector, the Ganden doctrine, or Je Tsongkhapa’s Dharma, in Tibet.