Member Q & A with Erica 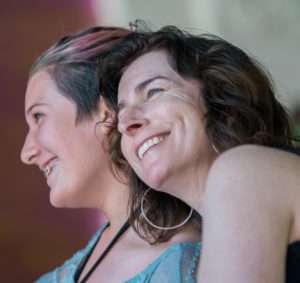 A few years ago, when Erica, a busy wife, mother and midwife, was facing some major personal challenges, she decided to attend one of our weekend meditation retreats. That weekend, unexpectedly and almost instantly, she found a new feeling of happiness—a calming happiness that, she says, has only continued to flourish.

We sat down with her recently, and she shared how her involvement with KMC has changed her outlook, her marriage and her daily experiences for the better. Excerpts from our conversation below:

How did you find meditation?

I found meditation a long time ago—maybe 20 years or so. I mostly did mindfulness and breathing meditations to clear my mind. It helped me to calm down, but it would only take me so far. I was looking for something else.

It was a difficult time in my life. I was feeling sort of depressed and hopeless, and I felt like I needed a stronger connection to something that would help me improve my happiness not just de-stress or relax. I had gotten on the Kadampa mailing list after going to an event years ago, and just around the time that I was thinking I should do something different, I got an email about the Lamrim retreat weekend in January. It was something different and I thought I should check it out. Kadam Lucy was teaching it. I just immediately got relief from all the concerns and worries and stuff in my mind.

What was it about that retreat that resonated with you? Was there something specific said?

There were a lot of things said, but I think, for me, it was mainly the focus on getting out of my self. It suddenly became so obvious that I was very stuck in my feelings, my problems, my worries and about how I was going to change the situation around me. On the retreat, it was so clearly put that the best way out of my own misery was to focus on others and help others.

Also, I think it helped that the Lamrim meditations were pretty specific. Instead of focusing on my breath, we were focusing on virtuous objects. I find it much easier to meditate on a specific Dharma teaching than to just breathe, because my mind just wanders. But when I can focus in on something more tangible or helpful, it changes things for me.

How have those changes in your life continued?

Yeah. I hope this doesn’t sound too far out there, but my life has completely changed since then. My marriage, at the time, was not really good. I thought it was because he needed to change—that he needed to do this or that so I could be happy. Almost immediately, when I realized that all I could do was change my own mind, that whole dynamic changed. My happiness increased instantly—literally—that weekend, and that has continued. Not that I don’t ever get in a bad mood, but I hardly do. I feel like it has just helped me to focus on other people.

I don’t know when it was said—probably at a KMC workshop—but this one thing really changed my marriage. It was that when I’m in a marriage, I should focus on the thought, “I love this person, and therefore, I want to make this person happy,” instead of, “I’m unhappy in this marriage, and how can this person please me?” It was like an instant relief.

How have you developed your practice since then?

Since that time, I’ve kept coming. I’ve really worked on developing a more consistent practice. I joined the Foundation Program and Teacher Training and have really enjoyed it.

I need to get deeper into what is behind those meditations and those concepts, but what I really connect with, of course, is the meditations.

I went to the mountain retreat a couple years back, and at the time, I knew I wanted to participate more deeply, but I’m a mom and a midwife, and I’m busy. It’s hard to make the time for that to happen. I have one day off a week, and that’s Sunday. Before this retreat, the Foundation Program class had been on Tuesdays and Thursdays, so I could never go. So, after a puja one night at the retreat, I prayed that I could figure out a way to be in the Foundation Program and really delve more deeply into my practice. The very next morning, the first announcement that was made before we started our next session was that the Foundation Program was being moved to Sunday nights, and instead of the two days, it was going to be a longer block on Sunday. I couldn’t believe it…prayer, answered!

I’ve had so many experiences—spiritual experiences—like that since coming to the center, where it seems like the way sort of opened up to me, where before I didn’t see a way at all.

I love Kadam Lucy, and I think what really attracted me at that first weekend retreat was the way that she taught. She’s very humble in a way that makes her teachings relatable. She’ll always say they aren’t her teachings—that it comes from Buddha and a long line up to Geshe-La, which I know is true. Yet she has a way of presenting the material that makes it really relatable to me, along with a sense of humor. I’m never bored. My mind doesn’t wander when she’s teaching. She has such a way of connecting to people and making it practical. I do enjoy hearing the stories of all the Buddhas, but I want to hear how I can do this and how it can change my life. She talks about how we all have these delusions and are all operating within a faulty system, including her. It’s not like she’s someone separate from us and can’t relate.

And then, the KMC community. Everyone has been so supportive. I may have been shy at first. I thought, “Oh. All these people have been doing this for so long, and I don’t know anything!” Yet, I feel comfortable asking anybody who’s been there longer any questions that I have. I have also gotten into volunteering at the center, and it just feels like I have a whole new support system of people who understand so much more about the spiritual path that I’m trying to accomplish.

Did you grow up with a spiritual path?

Not really. I grew up Jew-ish but more secular. And honestly, I had always wanted something. I remember as a teenager and young adult feeling very alone, and I would freak out about things. I had nothing to grab onto that was bigger than myself. I remember wanting to go to Hebrew school as a child and my father saying, “No, no, no. That’s all hooey.” As an adult, I had been seeking something for a long time, and I had tried many different things. When I came to KMC, it was like I found my spiritual home. It just instantly felt like where I was supposed to be and what I was looking for all that time.

What are some of your favorite lessons in Buddhism? How have they helped you?

Not that I have a great grasp on it, but the wisdom teachings on emptiness have flipped my perspective on things so much. I just don’t find myself getting as caught up in things that used to bother me, the little things that I used to obsess about or think that I had to fix. I spent so much of my mental energy on things that I really had no control over. I don’t waste so much mental energy on it anymore. Now, I stay calmer when things go wrong—even just in traffic. I roll with things a lot easier now. Maybe that’s been the biggest external change. Life just seems easier.

How do you think Buddhism and meditation can contribute to peace?

Without getting too much into the religious aspects of karma and all that, I do feel like the only way to change my experience of the world, is to change my mind and to stop focusing on BS, for lack of a better term. When we develop compassion and do these meditations and expand our concern, the little problems just shrink and go away. We have a much more even view of things. It feels like even though I know I can’t fix the world, switching my perspective makes me feel better about the world—even about terrorists or politicians.

That’s sort of my litmus test for how much compassion I can have. Can I feel compassion and love for a politician I disagree with, for example? And I can. I understand that everyone’s operating from their own delusions, and that’s pretty sad. It’s going to cause them problems in the future. I don’t know what the outcome of all of this is supposed to be, but increasing compassion for all living beings is doable, and it’s such a more calming and positive view of things than thinking, “These people suck. Those people suck. Everything’s a mess.” Of course, there’s problems in the world; we’re living in samsara, and it does suck. But there’s also hope within that too. We can all find peace.

What would you say to someone who isn’t sure about trying meditation?

I’d say try it out. The only way to test its effectiveness is to experience it and decide for yourself. Everybody I have brought to the center—my daughter, my husband, and quite a few other people—has had a positive experience there. Not everybody has continued to come, but I feel like it’s worth a try for anyone who’s looking for a change or for a way to live more peacefully in their own lives, on whatever level. It’s for anyone who wants to be less irritable or to be calmer—all the way to those who already on their way to becoming enlightened.