Member Q & A with Alex 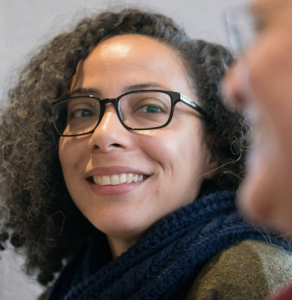 Alexandra Bonano is the Administrative Director at KMC Colorado. She joined our community in August 2019, after moving to Denver from New York City, where she grew up.

We recently interviewed Alex about her early experiences with spirituality, how she eventually found Kadampa Buddhism, and the ways her practice continues to change her life today. She also shares her thoughts on how we can overcome the anxiety and pain related to the current COVID-19 crisis by empowering each other with Buddha’s teachings.

Here are excerpts from our conversation:

Did you grow up with a spiritual path?

I grew up Catholic — like VERY Catholic. The funny thing is, my family, my mom especially, is very Catholic, but as a young girl, I used to just go by myself to mass. I used to (wake up early in the morning) and take myself to church.

All through my life I experienced depression, since I was very young. I had a very hard childhood. So, I think I always felt like I was seeking something (to make me feel better), which is why I would go to mass on my own. I was trying to find something that could help me.

I was introduced to Buddhism when I was 10 years old by my older brother’s wife at the time. After that, I never stopped being interested in Buddhism. As a teenager, I would seek it out and read about it. But it was a little bit scary to me, back then. A lot of the stuff that I read was on how the nature of our life is suffering. When I was a teenager reading about that, without any commentary or methods, I thought, “Okay. This sounds really interesting, but it’s a little dark.”

Then, during college, I became an atheist. I was very much against religion for a while, mostly because of the treatment of women throughout history. I was super duper feminist for a long time, very extreme. I just thought all religions were very corrupt. And personally, I didn’t really find that any part of religion was helpful to me. Looking back, I realize it was mostly me just being a rebel.

When did that change for you?

It wasn’t until my mid 20s that I actually started searching actively for meditation. Meditation had become popular already in New York, so I thought, “Let’s search some Buddhist centers.”

I had a whole list of places, and I remember I went to one. It was a Zen Buddhist center. I went to a 30-minute intro class for meditation. And I loved it. It was great. It was simple. There was noisy construction going on right outside of the class, and I was still able to engage with the meditation. That’s what I loved most. I thought, “Wow! Meditation really does work.” I was distracted sometimes, but it was okay.

How did you first get involved with the New Kadampa Tradition?

It was on my list of meditation centers, but I didn’t go to the main Kadampa Meditation Center in New York City at first. I lived far from Chelsea, and I didn’t feel like commuting. So, I went to a branch class at the Upper West Side, which was closer. I just went to the one branch class and then decided I wanted to see the center — but not for the classes. It was funny. I just really wanted to see their shrine. I always loved Buddha statues, and I remember on their website, they had this little tiny link on the left hand corner that said, “Come see our shrine.” So, I did. I went to see their shrine, and I ended up staying for a class.

From then on, I started going to the General Program (GP) and the intro classes. I went to everything. I was so shocked really at how clear and true the teachings were. I was like, “This is REALLY interesting.”

What resonated with you early on?

Most people have the same answer. You just have these moments, when you’re sitting there [in a class or a meditation], and you think, “This is all making sense!” It’s actually relatable. You start putting pieces together, and everything just fits together — FINALLY. I had thought nothing was helping, and then I was like, “Whoa! This is actually making a lot of sense.”

Did you have any doubts when you first started attending classes?

Yes. I read every part of the center’s website to make sure I wasn’t joining some weird organization. I still had many doubts for a while, maybe for like three years, after that but I never stopped attending classes. And I was really against the prayers for a long time. I liked going to the classes, but I avoided the prayer stuff.

How has your practice changed over time?

My practice has actually evolved completely. For the first few years, I was going to everything I could, except for anything that had to do with prayers. I remember finally going to a chanted prayer session. And that’s when my practice started to come alive. I immediately saw the difference between doing a breathing meditation or doing the Lamrim meditations without prayer, and then setting yourself up with prayers and doing the Lamrim. It felt like someone was holding you up, and helping you, as you were meditating. It became something much more than I thought it could be.

How has meditation helped you in your day to day life since then?

I can only tell you by what other people tell me. My sisters and my dad — people that knew me for a very long time — they noticed that I wasn’t angry anymore, that things weren’t bothering me like they did before. To my sisters, I was known as someone who was angry all the time. The first book that I got was How to Solve Your Human Problems, because it was all about anger.

In general, meditation has taught me that there are consequences for not watching your mind. I learned that I have to take real responsibility for what’s coming up in my mind.

What have been the biggest obstacles in your practice?

The biggest obstacle is losing my faith, actually. It’s something that you have to train in all the time. The tricky thing about not having faith is that you’re always deluded. You’re angry. You feel really discouraged. Without faith, the beliefs that help you most — that mediation is good or that you can go to Buddha for refuge — all go out the window. My greatest challenge is just trying to maintain a feeling of unwavering faith. But it’s a good challenge.

How do you overcome these lapses in your faith?

It depends on the situation. It’s just a matter of being creative and not forcing yourself or turning your practice into something you have to do, like a chore. Sometimes when I am feeling really discouraged — when I don’t want to get out of bed, for example — I just close my eyes and imagine Buddha in front of me or imagine breathing in clear light. Just simple breathing meditations can work. Lately, I’ve been reciting a mantra.

I think it’s important to be really really gentle with myself and focus on where I am at the moment. Sometimes I just have to push myself to the meditation cushion. Then I think, “I can push myself to the cushion, but I’m not going to push myself when I’m meditating.” Sometimes I just bring my cup of coffee and sit on the cushion and just look at my shrine and feel connected with the Buddhas.. It’s just a matter of being really flexible with yourself and enjoying everything that makes you feel better.

What is the value of the Kadampa community?

It’s a feeling of connection and freedom, even if you are having a really bad day. Do you know how many times, living in New York City, I’d have a really long day, a really bad day, and then I’d have to go to the Teacher Training Program class? But as soon as I would walk in, I would be surrounded by other people and feel the connection. It’s a relief.

How do you think Buddhism or meditation can help us get through these difficult times?

It’s that feeling of refuge. I think most people need to feel that all of the painful feelings coming from this virus and the quarantine — the anxiety, the worry, the loss — are not permanent. If someone hears that, and then a teacher gives them the method to actually put that lesson into practice, then that’s liberating for them. It’s empowering. You experience a freedom from that anxiety and grief.

What would you say to someone who is considering Buddhism?

I would say to let go of all expectations that you have. We go into this stuff, like anything else in our life, with a lot of expectations, and we’re easily discouraged. We expect meditation to work immediately. We expect painful feelings to disappear right away. Don’t lower your expectations; let go of all of them.

Go into it being extremely kind and gentle with yourself. Be open to not doing things the so-called right way. That’s the only way you’re going to be able to sustain a practice and keep going.

What else should people know about KMC-CO?

I’m fairly new to the Colorado center, but I find that all centers are pretty similar. We all teach the same thing. I don’t think anybody would regret going to the center or listening to any of the classes [via livestream]. I think they’ll find it very meaningful in some way. The classes are, at the very least, intellectually meaningful. They will always be very practical. You will be able to practice whatever you hear during class in your life.

And it’s good to know that you can always question everything — I mean, everything! I think that’s the best way to go about it, because that’s the only way you can go deeper, by questioning things and then taking them to heart. We learn a lot of stuff that is very different from the way we usually think; it’s the complete opposite actually. But it’s what’s going to help you improve and change your life.

I would advise people to just try it out, with an open mind. It’s kind of like bungee jumping. We try a lot of crazy things as humans. I know I have. So, I think we can all definitely try a meditation class.